The Small Circuit is a collection of temples in the inner road of Angkor’s archaeological park. It has the most famed temples to visit including Angkor Wat, Bayon and Ta Phrom which was the set for the movie Tomb Raider. I visited the Small circuit on my third and fifth days in Siem Reap (leaving a day of rest in between) which was the second and third day of my three day temple pass.

On the first visit around the small circuit (third day in Siem Reap) we customised a tour which included the small circuit and a outer temple Banteay Srei (on a separate post) which was 40km outside the Angkor region. This tour was again carried out using a Tuk-tuk which I still feel is the best way to roam the province. Our tuk-tuk driver decided to take us 40km out to Banteay Srei first and then return to Angkor to complete the small tour in which we only visited the three main temples.

On the second visit around the small circuit, our fifth day in Siem Reap I revisited the three main temples again however this time with an English speaking guide using a more comfortable airconditioned Van. The difference was there to experience and I do have the pros and cons of the two touring methods in Siem Reap.

Ta Phrom is the first temple we visited in the small circuit after our short detour to Banteay Srei which was 40km further. Ta Phrom originally called Rajavihara meaning the ‘monastery of the kings’ was another built by King Jayavarman VII. It was said to be built to honour his family and was thought to be a place for religious education.

Ta Phrom is one of the big three temple that is highly advised to visit in Angkor’s archaeology park with Bayon and Angkor Wat being the other two. Ta Phrom is particularly famous for being the setting for the film Lara Croft: Tomb Raider which was released in 2001 staring Angelina Jolie. Furthermore this place is especially popular not only for its architecture but also its setting with tall trees growing effortlessly on the buildings which make for enchanting and majestic scenery, perfect for photo opportunities. Its artwork and carvings are also a pleasure, there are portrayal of a number of dancers, animals, religious figures and many more, my personal favourite is the face peeking through a tree trunk smiling (shown on picture below). However quiet mysteriously there is said to be a carving of a stegosaurus which is fascinating and also baffling many experts.

Ta Phrom’s impressive structure and its encounter with nature is just one of the reasons you must go to this temple. For me the experience became stale after already seeing plenty of similar temples the day before. I was starting to get the temple overload feeling. The only addition for me here was the trees growing on the buildings, apart from that it was just another temple but with the added reputation of being in a Hollywood movie. Nonetheless this temple is a real beauty and very picturesque but because of this the crowd levels are very high and it is very difficult to capture the best photos without unwanted people appearing. This was probably the most congestion temple I visited.

Bayon which is situated inside Angkor Thom was the second temple I visited inside the small circuit. A later Buddhist temple built by King Jayavarman VII dedicated to Buddha. This was said to be the centrepiece of all the kings building programs. However after the king passed the temple was changed into a Hindu temple and then later reverted back.

I have to be honest that at this point of my travels after two full days of temple visits, I was starting to get all templed-out somewhat bored of seeing temple after temple. However seeing Bayon from a far distance I knew I was in for something totally different, something very special. The architecture of this temple was unique, it is famous for being the monument with over two hundred faces smiling from thirty seven different towers. There are three different levels and all could be visited, nearly every step inside the complex is a goose-bump moment and every angle is majestic and charming, a photographers haven. There were not as many people here than I thought there would be which added to the positive experience I had here.

All in all Bayon or Angkor Thom is one of the most mind-blowing incredible thing I have seen in my travels. I came to Siem Reap anticipating if I could find the place that could take my current favourite (Machu Picchu) off my top spot. In my opinion Bayon is unbelievable even after you’ve seen it, truly a spectacle to see in any angle. Bayon definitely came knocking for my personal top spot, but unfortunately I still believe Machu Picchu still edged better and Bayon fell short. Nonetheless Bayon was magnificent and I would advise any traveller to go to Siem Reap and visit this special temple.

Angkor Wat was the very last temple I visited on both my small circuit touring days (days 3 and 5). Somewhat the finale of my Siem Reap and Angkor visit. This temple is the most famous temple of them all, so important for the country that it is even featured on the Cambodian flag. It is a Hindu temple built by King Suryavarman II in the 12th century. This Hindu temple converted to Buddism and reverted back a few times along the ages due to war and handover of Kings. This temple is still an active religious place and pilgrimages do happen here.

My first observation of Angkor Wat was its enormity and the beautiful setting the temple was built on. Before entering the temple walls there is a scenic lake you would need to cross. A temporary float bridge was placed when I was visiting as the bridge was under refurbishment, however this didn’t affect the experience in anyway. After getting inside the temple walls you will walk (5-10minutes) an incredible path heading to the central five tower building, along the way you will see beautiful two beautiful lake/ pond on each side and small buildings which are known to be libraries. It is said that this walkway was only used for the king himself and nobody else was allowed to walk here. Once inside the temple you will see many monks, artwork, stairs and headless statues (as thieves would steel the heads to sell on the black market). There was a line to go up the central monument however due to the heat I opted to miss this out on both my visits. There are many brilliantly preserved carvings on the walls which portray many of both the Hindu and Buddhism beliefs.

Overall Angkor Wat was special and I see the reason why this is the most popular out of all the temples. Like many of the temples it is picturesque and has huge historic significance. Although spectacular, Bayon was still my favourite temple overall due to the architectural style. Angkor Wat is huge and maybe an hour to three hours would be needed depending on the detail you want to visit. This temple in my opinion has the most visitors but due to the huge space and different passages it is not as congested as Ta Phrom. In my opinion Angkor Wat is the cover attraction of Cambodia, so missing this out on a Siem Reap visit would be a disaster.

The temples below are temples within the small circuit but I didn’t visit these due to the tours we did. However here is a little insight to the collection of these temples.

Thommanon- This temple is a small Hindu temple dedicated to Vishnu and Shiva. Its Architectural style is the same as that of Angkor Wat and this temple has excellent conditioned artwork. 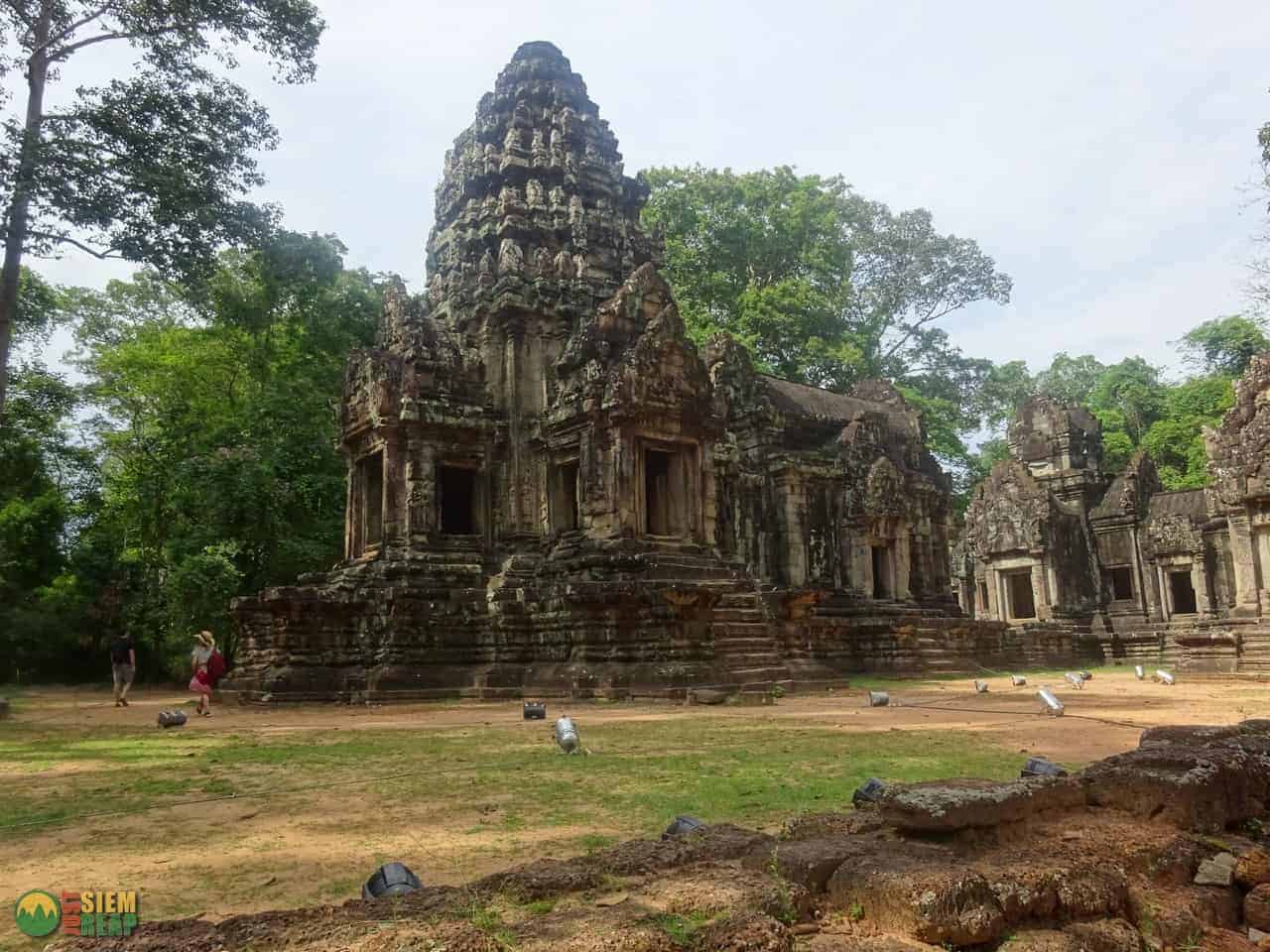 Banteay Kdei– A Bayon styled temple said to be one of the most peaceful within the small circuit. Although very near two highly visited temples in Angkor Wat and Ta Phrom it seems this is missed out by tourists. Built by King Jayavarman II dedicated to Avalokitesvara, this temple has complex structures and its peaceful scenery may be a reason for you to visit.

Srah Srang – Srah Srang is the Royal Bath. This reservoir or pond was built in the 10th century and then modified by King Jayavarman II. Setting in-between the small and grand circuit this location is a very popular location to watch the sunset.

Prasat Kravan- Another place in between the small and grand circuit. This is a temple not built by a king but high ranking hindu priests. Special features of this temple is its five brick towers, it is said the best time to visit this is in the morning.

I visited the small circuit using two different methods, one a cheaper un-guided tour using a tuk-tuk and the other a more expensive guided tour using an airconditioned luxury van. In my opinion no matter how much money you have I would always try and use the cheaper method using a tuk-tuk. Although unguided you can roam these temples at your own pace and leisure. Albeit the guide on any tour would be more informative if you want to learn more about the place but having a travel book or internet in-hand would just be as good (in my opinion). However probably the biggest reason for the cheaper option is that the tuk-tuk is a unique experience and no matter how hot, dusty or wet it is you wont gain this feeling back home, an airconditioned van takes all the character out of the tour.

My overall experience with this collection of temples were positive, they were impressive and extraordinary to say the least. Something that you thought you would only see on movies. The experience of these temples especially the big three are dampened with the sheer congestion of crowds (much more than the grand circuit), not only for the perfect picture opportunities but also with the noisy lively atmosphere. Nonetheless all temples in the circuit are unique and comfortably sit in my top 2 of my favourite places I have visited with Machu Picchu still the best I have experienced.

Also read my in-depth experience on each section of my trip:

Tickets and Entry to the Temples

Also Check out our blog of